What role does the condom play among men who sleep with other men (MSM)?
In September 2014, the Danish AIDS-foundation launched a campaign together with the Danish Health Authority called “Only with Condom”. The campaign launched by distributing kits with different sized condoms among men, who sleep with men (MSM). Along that, the AIDS-foundation wished to highlight the advantages of using condoms as well as clarify any misconceptions regarding the use of condoms.

The AIDS-Foundation contacted Analyse Danmark regarding an analytic set-up, which could generate inputs to support their message about “reintroducing” the condom in order to e.g. prevent HIV among MSM, as well as generate awareness utilizing the conclusions and numbers in regards to PR.

A combinationstudy in three phases: in-depth Interviews, online surveys and a Bulletin Board 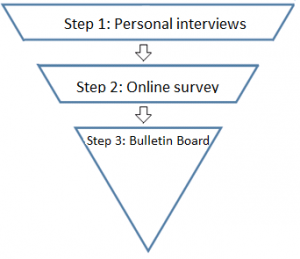 As per the left figure, explorative personal interviews with MSM were conducted first in order to uncover rational and irrational arguments on opinions and usages of condoms, as well as the language regarding safe sex.

Based on the results, a quantitative online survey on sites typically frequented by the target group was conducted. Sites include boyfriend.dk, links to the survey in a newsletter to members of Scandinavian Leather Men (SLM), as well as through the Facebook page of the AIDS-foundation in order to get as much differentiation among MSM as possible.
Finally, a Bulletin Board with mobile app function was created in which the identified themes and hypothesises were discussed in an anonymous online forum.

This combination was chosen in order to dive into the theme “refusal to use condoms” which is a taboo for a lot of MSM. A combination like this made it possible to both research a tabooed behavior in depth, as well as get a quantitative number based on the knowledge and behavior of the target group.

New insights and knowledge base as a backdrop for dialogue among the collaborators of the AIDS-Foundation
Analyse Danmark’s report goes into depth regarding the motives and barriers regarding use of condoms among the target group, the role of the condom, the language surrounding safe and unsafe sex as well as additional insights. The study shows, among other things, how MSM operate with a so-called calculated risk assessment regarding partners and situations in order to assess whether or not they should use a condom as per the below illustration:

“trust in partners” is among the most important reasons for not using a condom, just like being affected by alcohol or drugs play a role. 49% of MSM, who have had more than 10 sexual partners in the last six month, also take advantage of the free condoms distributed at cafés or bars. This indicates that the distribution of free condoms is an important part of preventing HIV and other sexually transmitted diseases among this group.

The study has contributed to an increased knowledge of condom behaviors among MSM, including differences in the group based on e.g. sexual preferences (Active vs. passive), age, etc. Similarly, the study has helped create a knowledgebase for the dialogue between the AIDS-foundation and Copenhagen Municipality regarding grants free condoms at cafés or bars.

”The study has provided us with insights into motivations affecting the use of condoms or lack thereof in very intimate situations. It makes it possible for us to formulate heavy messages both in our dialogue with MSM as well as in mass-communication. The quantitative part of the study has furthermore showed us how the easy access to free condoms is an important and central part of the Danish prevention of HIV”
Ole Møller Markussen, project manager